B.F.C. Sistemi is the final phase of a company that, although with different protagonists and operational areas that have changed over time, has been in the territory for more than 30 years.

The first appearance, in fact, dates back to the 1980s when the founding family started manufacturing light metal products to order for an audience of important and diversified customers operating in the sectors, industrial, refrigeration, furnaces, soundproof hoods, washing machines etc.

In the early 2000s, the original company gave way to a new company that, now led only partially by the original entrepreneurial family, continues with its production processes substantially unchanged. To the traditional manufacturing in iron and steel, it has been included also those in aluminum, integrating the productions with the pre-assembly and testing phases.

In 2014 the need of facing with greater competence and completeness a constantly evolving market leads the company to choose a management system. This new system is characterized by important previous experiences in industrial areas with a great level of technicality in order to re-launch the company in new sectors that can function with the traditional industrial areas.

This is why in 2015 the company acquires a stake in the company IndecoSrl, which designs and builds chemical and industrial air-conditioning systems.

In the summer of 2016, the company assumed its current name of BFC Sistemi Srl and has significantly increased its share capital.

The company has also started the production of cogeneration and trigeneration plants, intended for industrial users, heat management societies, and large consumers.

BFC Sistemi has an industrial-warehouse of about 3000 square meters, as well as an independent office building located in Busnago, Via del Lavoro n26, Italy, easily reachable from the A4 motorway taking the Cavenago and/or Trezzo sull’Adda exit, logistically convenient as it is closet o the Bergamo industrial district of Milan, and to the Venice-Turin and Como-Varese motorway axis. 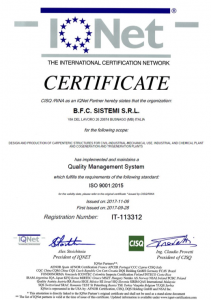 © 2018 B.F.C. Sistemi S.r.l.
We use cookies to ensure that we give you the best experience on our website. By continuing to browse the site you are agreeing to our use of cookies.OkRead more